Water Quality Efforts Soak Up the Benefits in Monona 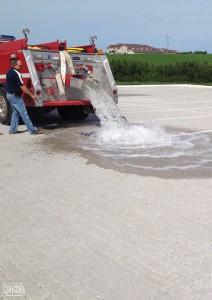 A press release by the DNR  regarding the permeable paver parking lot in Monona has garnered a lot of attention. The video in the release on February 10, 2015 has been viewed by hundreds of thousands of people. The DNR has also fielded many calls inquiring about the project. The permeable paver parking lot was completed in 2014 by the City of Monona in an effort to reduce the water quantity and improve the water quality of a nearby un-named tributary that eventually feeds into the Turkey River.  The press release can be found here: Press Release

To find out more about the Clean Water State Revolving Fund